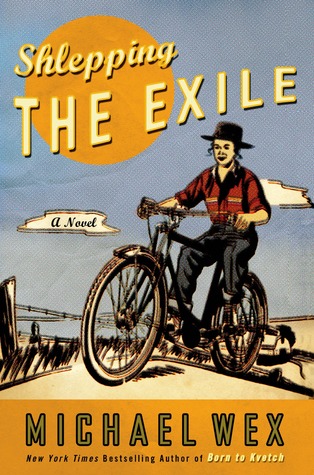 Michael Wex’s first novel, Shlepping the Exile, was originally published in 1993 by a small Canadian press which has yet to send Wex a penny. A revised, expanded version was published by St. Martin’s Press in 2014.

The rollickingly dyspeptic adventures of Yoine Levkes, boy hasid of the Canadian Prairies, Shlepping the Exile is an inside portrait of orthodox, post-Holocaust Judaism in a place that it never expected to be.

Svelte and supple as unleavened bread, Shlepping rends the shmaltz from Jewish fiction and replaces it with a pound of real flesh.

It’s the story of Yoine, his refugee parents, and the Jewish community of Coalbanks, Alberta, between 1956 and 1959. Confronted with a dying people, an ailing culture, the perils of near-orphanhood and the allures of Sabina Mandelbroit, whose family doesn’t keep the Sabbath, Yoine can no longer tell whether he’s a human being or a loot-bag of conflicting traditions. He’s too religious to be “normal”, too “normal” not to realize this, and too much of a kid to be able to make any sense of it.

Read an extract from Shlepping the Exile here.