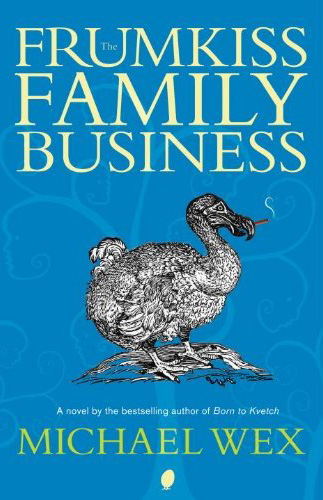 Elyokim Faktor, the famous Yiddish writer, arrived in Canada in 1947. At the time of his death in 2008, he was the idol of three generations of Canadian children, as beloved and well-remembered as Mr. Dress-Up or The Friendly Giant.

The Frumkiss Family Business is the story of Faktor and his family, especially his grandchildren, Vanessa, Randall and Rachel, the children of his daughter Tammy and her husband, Earl Frumkiss, Canada’s best-known podiatrist.  These kids have been searching for themselves for four decades when posthumously revealed information about Faktor’s life before and during World War II leads them to wonder if they’ve been looking for the wrong people.  They know that they’re Frumkisses and always will be; they’re no longer sure that they know what any Frumkiss but their father really is, though.

Touching on the lives of four generations of one big, hapless family, The Frumkiss Family Business is an uproariously kaleidoscopic portrait of middle class Canadian life at the beginning of the current century, especially––but not exclusively–– in Toronto’s Jewish community. Corrosive, smart and laugh-out-loud funny, The Frumkiss Family Business is a novel that brings the fun back to profundity and moves Michael Wex to the first rank of Canadian writers of fiction.

Imagine Thomas Mann’s Buddenbrooks without the stodgy Germans or The Brothers Karamazov with only one brother. Finally, a novel that does for Toronto what Mordecai Richler’s books did for Montreal.

…a hilarious portrait of Jewish life in Toronto…and a new hero for Yiddish literature, one who, even while portraying that most tragic of birds, the dodo, represents not the extinction of Yiddish culture, but its tenacity.

His publicists liken Wex to Jewish literary icons Philip Roth and Mordecai Richler. Oh sure, there are similar themes, and Wex is as irreverent and humorous, but he has his own style, and it is — though somewhat hidden between lines of character misery — hopeful. His ability to hold back story, like Factor holds back a punchline, and carry one thread, and then another all the way to just the right moment, is breathtaking. It’s so subtle you don’t see what’s coming until, as with one of those damn magic-eye puzzles, all of a sudden something beautiful appears.

Channelling a duck soup of influences—Mordecai Richler to Michael Chabon, Henny Youngman to Woody Allen—Michael Wex imbues a Toronto family saga with subversive wit, a lean into the absurd, and a sense of funny that is wondrously strange. The Frumkiss Family Business won’t quit being surprising, hilarious, and touching.

First things first: this book is funny, a provocative black comedy that will remind readers of Mordecai Richler and early Philip Roth. And beneath the mordant satire, there’s a bonus—a warmly observed scrapbook of Jewish life from the rich cultural stew of Poland in the 1930s to the yeshivas and yiddishkeit of suburban Toronto.

Wex’s polished novel will leave you looking forward to many more from this emerging literary master.

The Frumkiss Family Business is available in stores across Canada and online around the world. Order your copy now by clicking on one of the links below:

Check out the The Pogromist’s Lullaby – a song from the book which has been set to music.