How to Be a Mentsh

How to Be a Mentsh (and Not a Shmuck)

is a self-help book from a Talmudic perspective. 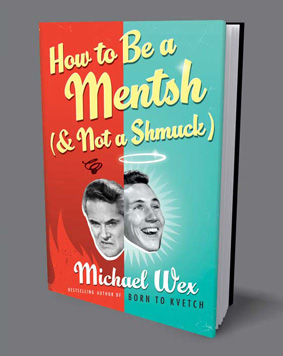 “Michael Wex’s new book is just superb. In How to Be a Mentsh (and Not a Shmuck), Wex convincingly argues that the great Jewish language called Yiddish carries in its vocabulary some of the great truths of Jewish ethics, above all how to be decent to other people. The book is funny, too, and is certainly the finest explanation of the religious significance of The Apartment and Groundhog Day.Talmud, Torah, Jack Lemmon, Bill Murray–need I say more?” – Mark Oppenheimer, author of Thirteen and a Day: The Bar and Bat Mitzvah Across America

It doesn’t matter who you are, where you come from, what religion you follow, or if you follow any religion at all. The principles outlined in this book will work for anyone who makes the effort to put them into practice…the most important one of all originates in a piece of advice that a rabbi gave to a gentile.

“With a brilliant writing style which has made him one of the leading lights in the Yiddish revival, Michael Wex distills the age-old principles that have been the nucleus of Jewish survival, and he forms them into some relevant lessons, delightful anecdotes, and real-world applications for not just Judaism but all faiths. A superb book. In the pages of How to be a Mentsh, the author works to convince readers that the great Jewish language, Yiddish, embodies in its vocabulary some of the great truths of Jewish ethics—in essence, it tells us how we can be decent to others. This knowledge is powerful. As cited in a piece in the New York Times on July 21, 2009 by Sam Roberts (Yiddish Resurfaces As Cities Second Political Language), Michael Bloomberg, Mayor of New York, probably used Yiddish as a means of having his kugel and eating it too.” – Claude M. Ury, Sacramento Book Review

Wise and hilarious, this is a book about happiness, your own and that of others. The principles outlined here will work for anyone, Jewish or not, who makes the effort to put them into practice.

“Yes, the Yiddish words “schmuck” and (to a lesser extent) “mentsh” have entered the popular English lexicon, but few people in the general population have a more than cursory understanding of their meanings. Novelist, professor and performer Wex (Born to Kvetch) has an intimate knowledge of the Yiddish language and Jewish culture, and here explains both terms in the context of Jewish and non-Jewish life. Though its title might suggest a satirical self-help, Wex is a committed Yiddish revivalist, and this lesson in language and culture is rooted in a shocking degree of scholarship; happily, it’s also blessed with humor, grace and a well-developed sense of contemporary pop culture (references range from Genesis to Groundhog Day). The end result is a consistent pleasure: entertaining, educational and only minimally pedantic, with more than a few thought-provoking suggestions for achieving mentsh-hood (or at least avoiding shmuck-itude).” – Publishers Weekly, starred review

Drawing on the “wisdom of the ages,” Wex shows readers how to figure out the right thing to do in any situation. First he describes the two words mentsh and shmuck. The former refers most often to an adult who has learned to think of others first; the latter refers to someone who thinks he or she is someone special.

“Michael Wex’s new book combines deep knowledge of the Yiddish language, Jewish folklore and traditional Jewish sources, from the Bible to the Talmud and rabbinic and Hasidic commentaries, in an often humorous and frequently provocative guide to being a good person, a mentsh. The first rule of being a mentsh is not to be childishly self-centered, not to act only on behalf of one’s own desires. Wex uses traditional sources, like the Talmud’s stories about the great Hillel, to define ‘mentshhood’ as empathetic awareness of the feelings and needs of others combined with principled avoidance of inflicting harm and shame on others. Wex also uses references to popular culture, Victorian literature, television shows, and movies to make his points accessible to those not blessed with Yiddish fluency and years of Talmudic study…This book reflects extensive learning, serious thought, a sense of the absurd and the unfair, as well as an impish willingness to play the mazik (scamp).” – Jewish Book World

“Michael Wex, author of the best-selling book “Born To Kvetch,” is the “Sneaky Chef” of contemporary Jewish culture. Like the cookbook author who advises parents to slip puréed broccoli into the brownie batter, Wex writes books that look and read like snacks, but he hides scholarly vegetables between the covers. Few people who buy Wex’s latest work, cheerily titled “How To Be a Mentsh (& Not a Shmuck),” will suspect that they are about to read a book-length commentary on the Mishnah, and they probably wouldn’t have bought it if they had known. But Wex makes all this go down easy, for that is what he does best.

As advertised, Wex describes — with details drawn from both pop culture and Jewish texts — two types of characters in daily life: the mentsh and the shmuck. For a society accustomed to Christian models of “good and evil” (evoked by the book’s cover image of angelic and devilish faces), Wex’s greatest insight is that what distinguishes the shmuck from the mentsh is not evil, but selfishness. He begins the book by quoting a Yiddish proverb, “It’s never too late to die or get married.” Wex interprets this quip to mean, “It’s never too late to learn that the only thing that’s really special about you is the ability to… make somebody else more special than you are.” This book, he claims, “is about how to keep yourself from believing you’re somebody special.” Wex’s shmucks are not serial killers, but rather something more familiar: people whose inconsiderate behavior stems less from cruelty than from arrogance.

A recurring motif is the story of Kamtso and Bar Kamtso, a rabbinic legend from Roman-occupied Judea. A man hosting a party for rabbis intends to invite Kamtso, but his messenger accidentally invites the hated Bar Kamtso instead. When Bar Kamtso arrives, the host humiliates him and kicks him out. Later, when the emperor offers a calf for Temple sacrifice, Bar Kamtso takes revenge against the rabbis by blemishing the animal’s lip, rendering it ritually unfit. When another rabbi, Zechariah ben Aviklos, rejects the calf on ritualistic grounds, this (according to the Talmud) provokes the Romans into destroying Jerusalem. Wex breaks down this story into the varieties of “shmuckery” involved, from the host’s hatred, to the guests’ indifference, to Bar Kamtso’s vengeance, to Zechariah’s blind obedience, to ritual law, using each as an entry into a more subtle area of ethics. Wex likewise uses legends about Rabbi Hillel to explore the concept of empathy. In a surprisingly nuanced discussion, he takes Hillel’s “on one foot” explanation of Judaism — “What is hateful to you, don’t do to your neighbor” — and contrasts it with Christianity’s “golden rule” of “Do unto others as you would have them do to you.” Rather than just “the golden rule in the negative,” Hillel’s formulation is far more empathetic, because “doing unto others” makes the arrogant assumption that we know what’s best for others, whereas refraining from doing hateful things avoids that arrogance. What if, Wex suggests, being “saved” by Jesus (or Marx or the Quran or any ideology) made some people so happy that they wanted to “do unto others” by imposing their form of happiness on everyone else? “Hillel’s idea,” Wex claims, in a slight overstatement, “wouldn’t allow it to happen.”

Pointing out philosophical flaws in a book called “How To Be a Mentsh” feels a bit like bludgeoning a baby seal. Indeed, Wex deserves no end of praise for introducing traditional Jewish safeguards against selfishness to a society desperately in need of them. The only flaw in this book is actually a flaw in Judaism itself. Despite centuries of experience, Jewish tradition lacks a real understanding of evil.

A shmuck, as accurately defined by Wex, is the person who cuts you off in traffic, not the person who cuts off your head. There isn’t really a word in Yiddish for the latter individual, because the traditional Jewish view of such people is that they are instruments of God. According to a Jewish attitude dating to the First Temple’s destruction in 586 BCE and even earlier, true evildoers are actually God’s way of punishing the people for their sins. The story of Bar Kamtso illustrates this perfectly: The rabbis were convinced, as Wex apparently is, that Jerusalem was destroyed by the Jews’ “shmuckery” — as if the Romans (who later made sport of decapitating rabbis) otherwise would have been their best friends. The legacy of this idea is so expansive that even secular Jews today often regard radical evil (including more recent decapitations like Daniel Pearl’s) as something caused by their own actions, whether it was brought about because they were too kind to their enemies or because they weren’t kind enough. Even the Bernie Madoff scheme has been examined less as an example of criminal pathology than of its victims’ “greed,” as if bilked Jewish philanthropies were at fault for wanting to do more good, or as if the thief were a divine agent sent to test our morals.

This gaping hole in Jewish ethics ought not to matter for the casual reader who just wants to learn how not to be a shmuck. But Wex’s example of an oppressive regime created by the “golden rule” takes his discussion to the global and the cosmic from the interpersonal, and makes his task urgent. The rabbis clearly believed that God punishes us for our “shmuckery” through the evil deeds of others. But by removing any sense of divine justice from his discussion, Wex sidesteps this disturbing idea. He instead suggests an intriguing though problematic alternative: that real evil is just extreme arrogance, whether an arrogant desire to benefit oneself or to “benefit” one’s fellow man, and the way to prevent evil is to avoid arrogance at all costs. Traditionally, one avoided arrogance by entering a contract to humbly serve an omnipotent God. Bereft of this idea, Wex is left sifting through such movies as “Groundhog Day” to find a motive for altruism, and unsurprisingly comes up short.

Books popularizing Jewish tradition are themselves an honorable Jewish tradition, dating to at least the Middle Ages, and Wex’s book succeeds in bringing Jewish ethical discussions to an audience unsuspecting in the extreme. By publishing his book in the crass category of How To books — nearly all of which are devoted to the selfish pursuit of beauty, health, sex or wealth — Wex has achieved on the bookshelf what Hillel advised that we all do in life: “In a place where there are no mentshn, try to be a “mentsh.”” – Dara Horn, The Forward

You can also go to our CafePress store and check out the Mentsh-themed merchandise by clicking on any of the images below: 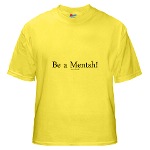 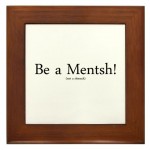 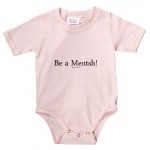