Shalom Life interviews Wex about being a mentsh 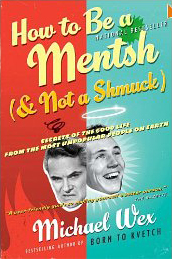 How to Be a Mentsh (and Not a Shmuck) comes out in paperback across North America next Tuesday.

To mark this, Wex was interviewed by Dan Levin at Shalom Life about what it means to be a mentsh.

With the movie “Dinner for Schmucks” putting that dirty Yiddish word right back into the forefront of the film goer’s lexicon, Wex reminds us that in an economic downturn, greed is no longer good.

“There’s a whole culture out there that tells you that being a shmuck is a wonderful thing,” he says. “When they made the movie [Wall Street in 1987] that was supposed to be ironic, then you got 15 to 20 years of that kind of materialistic yuppie culture that said that not ironically.”

Wex also talks about how his new novel, The Frumkiss Family Business, puts Toronto’s Jewish community firmly on the map.

“Bathurst Street is like a major character in the book,” says Wex. “We’ve got a city where over 50 per cent of the Jews in Canada live and it hasn’t really developed any Jewish mythology the way Montreal has to a large degree because of Richler.”