By Marilla on April 6, 2016 in Rhapsody in Schmaltz 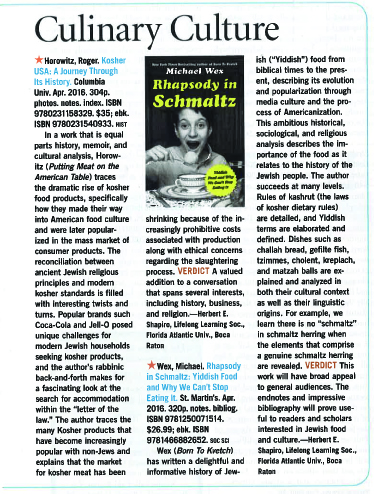 Rhapsody in Schmaltz got a starred review in the April issue of Library Journal.

Wex has written a delightful and informative history of Jewish (“Yiddish”) food from biblical times to the present, describing its evolution and popularization through media culture and the process of Americanization. This ambitious historical, sociological and religious analysis describes the importance of food as it relates to the history of the Jewish people. The author succeeds at many levels. Rules of kashrut (the laws of kosher dietary rules) are detailed, and Yiddish terms are elaborated and defined. Dishes such as challah bread, gefilte fish, tzimmes, cholent, kreplach, and matzah balls are explained and analyzed in both their cultural context as well as their linguistic origins. For example, we learn there is no “schmaltz” in schmaltz herring when the elements that comprise a genuine schmaltz herring are revealed.

VERDICT: This work will have broad appeal to general audiences. The endnotes and impressive bibiography will prove useful to readers and scholars interested in Jewish food and culture. – Herbert E. Shapiro

View all posts by Marilla →