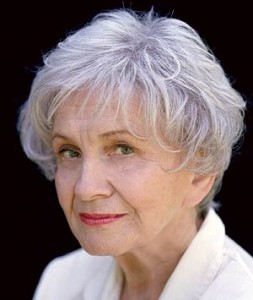 Since Alice Munro was named as the Nobel Prize winner for Literature today it seems like a good time to repost this piece I wrote for the Huffington Post about when she turned down the Giller Prize. Enjoy.

“How do you make a writer kvetch?” It’s a riddle that’s been going around for years. I first heard it in Yiddish, but have heard it since — usually from literary agents, editors, or publicists — in English, French, German, and even once in Hebrew. The subject of the Hebrew, as well as the most recent English and Yiddish versions, was me: I wasn’t getting enough promotion; I wanted more or bigger or any ads. I was pining for an empire, and they were giving me a niche.

What’s disturbing is that I don’t seem to have any reason to complain. I make a living from writing and my time is my own. Six or seven years ago, I was in my late forties, supporting myself as an adjunct lecturer in Business Communication who spent his nights driving taxi to cover the rest of the rent. More than once I found myself serving as chauffeur to students whom I’d flunked earlier the same day. You can imagine the tips: my cab was deliberately peed in more than once.

So what have I got to bitch about?

Nothing. But I don’t complain because I’m unhappy. Writers in general don’t seem to complain any more than musicians or painters or any other group of free-lance workers, they just tend to do it better; they’re often more articulate and virtually always have less in common as professionals than people who paint or play music. Where three musicians who play the same instrument can discuss mouthpieces, bows or picks, even though one plays classical music, another jazz and a third nothing but rock ‘n roll, writers of different sorts–fiction and non-fiction, genre writers and high art types– don’t seem to engage in too many spirited discussions of dot-matrix printers or innovative touch-typing techniques. Instead of tools, working writers have editors, publishers, agents, and almost any conversation among writers eventually ends up as a debate: Who has the most illiterate editor? Whose publisher is more clueless, whose agent more feckless?

“How do you make a writer kvetch?”
“Publish his book.”

It isn’t really ingratitude. It’s a way of asserting membership in a club that, from outside at least, still commands a surprising amount of awe and respect: people whose work is published by someone else who has usually paid for the right (or the privilege, depending on whom you ask) to do so. Although a writer may well have a legitimate grievance against her publisher or agent, a lot of the kvetching that takes place is really a slightly self-deprecating way of celebrating the fact that the kvetchers can make a living from writing.

Take me as an example. Coming from an orthodox Jewish family that occasionally clawed its way into the lower middle-class for up to two years at a time, I was acutely aware of the fact that the kind of jobs available to people like me embraced nothing that anybody ever dreamed of being: general clerk, payroll clerk, file clerk, shlepper. Some yearbook entry, that: “Michael looks up to Lord Buckley and Rabbi Joseph Rozin of Rogachow. His pet peeve is weekend hippies and he hopes to become a shlepper.”

Continuing in yeshiva would only have saddled me with rabbinic ordination, after which even shlepper would have been out of reach. I would have had to become a yeshiva-teacher myself, at a time when the staff of a number of prominent yeshivas had been striking for wages that sometimes hadn’t been paid for up to two years: these teachers were owed nearly six thousand dollars. In view of the fact that it was people like my father who hadn’t been paying those wages, we already knew that studying for the rabbinate was something you did because you were too religious not to or too stupid to do anything else — our world had no room for the kind of pulpit rabbis produced by accredited institutions. “Be a rabbi,” as my mother said, “but don’t try to make a living from it.”

I violated both of her commandments and ended up in graduate school instead. And very soon thereafter behind the wheel of a cab. Grumbling about not being on The Daily Show is just another way of reminding myself that no matter what else happens to me, I’ll never, to paraphrase William Faulkner, find myself at the beck and call of any son of a bitch with two and a half bucks to sit down in a cab.

We can see the other side of this kvetch-coin in the shock that went through the Canadian literary world when Alice Munro, who might be well-known in the U.S. but is a genuine celebrity up here in Canada, announced that she was withdrawing her latest collection of short stories from consideration for this year’s Giller Prize. The Giller is the most prestigious fiction prize in English-speaking Canada and Munro’s withdrawal before the list of nominees had even been announced is the equivalent of Philip Roth’s refusing to allow The Humbling even to be nominated for a National Book Award or Pulitzer. Munro has withdrawn from Giller competition before — she did so in 2006 in order to serve on the jury — but her rationale this time was entirely different. According to her publisher, “She has won twice and would like to leave the field to younger writers.” She doesn’t need the money; she doesn’t need the exposure. She’d like to give someone else the chance to kvetch about the pressures of real fame.

When I complain, I do it because I’m human. But Alice Munro has learned to kvetch like a mentsh.