The Art of the Kvetch: Jewish Humor as Secularism 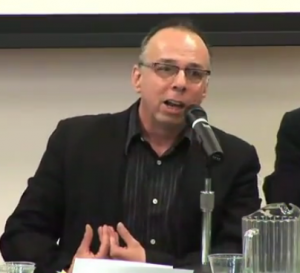 Last month Wex was in New York to take part in a panel discussion about the nature of Jewish humour.

The Art of the Kvetch: Jewish Humor as Secularism was presented by the Jewish Studies department at Eugene Lang College, part of The New School for Liberal Arts. The other participants were Noah Isenberg, author of Between Redemption and Doom: The Strains of German-Jewish Modernism and editor and translator of The Face of East European Jewry by Arnold Zweig; Jeffrey Israel, author of a dissertation on Jewish humor and politics; and Val Vinokur, author of The Trace of Judaism: Dostoevsky, Mandelstam, Babel, Levinas.

Here is the premise for the debate:

The modern tradition of Jewish humor emerged from the same ideological ferment that produced Zionism, Liberal Judaism, Modern Orthodoxy, and a wide variety of secular forms of Jewish identity. To this day, Jewish humor reinforces the bond between Jews even as globalization has brought it to millions of non-Jews. Is this lively tradition the result of a seed of humor planted deep in Jewish textual traditions, or is Jewish humor an exercise in self- loathing by an insecure minority? Having transcended its Yiddish forms in American comedy (from Lenny Bruce to Larry David), is Jewish humor a way for Jews to be Jews in a genre at once particular and universally accessible?

You can view the entire panel discussion by watching the video below (please note – if you receive this blog post as an email you will have to click on the link to the website to view the video).