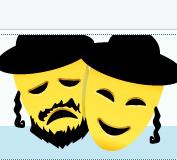 Recently Wex was interviewed by Emily Landau for the Arty Semite blog in The Forward. These are the results.

Michael Wex is best known for his acerbic, authoritative books on Yiddish language and culture, but in this fall’s The Frumkiss Family Business he has turned his attention to fiction. The sprawling novel is a farcical family saga, following three generations of a Jewish clan in Toronto’s Bathurst Manor neighborhood and questioning, in Wex’s characteristically hilarious way, the role of Jewish culture in a secular society. Recently, Wex took some time prior to his October 30 appearance at Toronto’s International Festival of Authors to speak to The Arty Semite about his new novel, the Canadian Jewish experience, and being compared to other Jewish writers.

Where did the germ of this novel come from?

What it’s about is what is it to be Jewish in a society like ours, where it’s pretty much a matter of how you think of yourself and how people around you think of you. What happens if your idea of what or who you are suddenly changes? What I was trying to do is take that question of identity in the modern world — Canada, the U.S., Western Europe — and put that into a Jewish context and try to be funny about it at the same time.

Some might argue that a common tongue creates some semblance of a stable cultural identity. Where does language fit into the characters’ Jewish identities?

It certainly influences it. The Frumkisses’ grandfather, the mother’s father, whose name is Faktor, is supposed to have been a famous Yiddish writer who has come to Canada after World War II. One of his big concerns is that his grandchildren won’t be able to read his work. He insists on the kids going to Yiddish-language schools, and in fact, goes so far as to found one, mostly so that his grandchildren can attend it.

The minute you start speaking Yiddish, it doesn’t really matter what else you might do or be. You’re sort of making a statement about who you ultimately are, even if you’re only speaking it because you’ve found yourself in a room with somebody with whom you have no other common language. One of the things about this book is that the Frumkiss children are presented as unusual, in that they know Yiddish. They’re otherwise supposed to be a totally white-bread, upper-middle-class Jewish family.

What are some differences you’ve noticed between the Canadian and American Jewish experiences?

Part of the reason I don’t think this book could have been written in the U.S. is that a garden-variety Jewish family at this point is much further removed from traditional Judaism than people in Canada are, just because of the mass Jewish immigration to Canada in the early ‘30s. If you go to a Conservative Jewish synagogue here, and you see what they don’t have — there are no women rabbis, there is no music played on shabbos or yom tov. The rabbis still walk to shul, whereas it’s not unusual at a Conservative synagogue in the U.S. to have a piano or an organ or a band. In that sense, the Canadian Jewish community is much more traditional.

The novel is set in Bathurst Manor, a predominantly Jewish area in North Toronto. What role does this neighbourhood play in the book?

Any attempt to portray Toronto as a literary setting tends to be downtown — I guess the classic example is Margaret Atwood. For the Jewish stuff, there’s been no real exploration of that area, of Bathurst Street itself. As far as I’m concerned, Bathurst Street is as much a character in this book as Egdon Heath is in Hardy’s “The Mayor of Casterbridge.” The Manor itself is important because you have these people grow up in a completely Jewish environment, yet still be in the city. It’s not like the suburbs in New York City on Long Island, where they’re also heavily Jewish and not particularly religious, but most of those people never see the city until they end up in college.

In reviews, you seem to be frequently compared to Mordecai Richler and/or Philip Roth. Do you find these comparisons flattering or oppressive?

Well, neither Richler nor Roth is anybody to complain about. But I think what’s odd is that the only real similarity I can see is that we’re all Jewish and we’re all trying to be funny some of the time. If you’re Jewish and you’re funny, you’re either Mordecai Richler, Philip Roth, or Woody Allen. One of these names has to come up.

Does humour open your work up to these kinds of reviews?

It’s not just with humour. It’s with any Jewish stuff that doesn’t have to do with the Holocaust. It shows that you don’t take this culture entirely seriously, that it can be reduced to a couple of food items and a few dirty words in Yiddish.

One of the things that Jewish writers have to deal with now is a growing lack of mainstream, across-the-board Jewish culture, a body of shared knowledge and a set of ideas that everyone’s familiar with, whether they agree with them or not. You’ve got less and less of that.