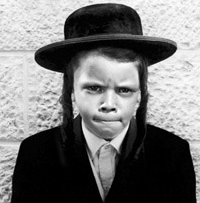 We just heard that Born to Kvetch has been selected in Steven Poole‘s non-fiction pick for tomorrow’s Books section of The Guardian in England.

Born to Kvetch was originally published in the States in 2005 and quickly became a New York Times bestseller. Last year it was published by Souvenir Press for the first time in the UK and we’re delighted that it has received this recognition from one of Britain’s national broadsheets.

Here’s what Mr. Poole had to say:

You probably know a “khokhem belayle”: someone who is “a sage at night, when there are no witnesses around to convict him of intelligence”. Such is one of the delights in this history and tour of Yiddish, whose author argues that the language is inherently ironic and oppositional (“Yiddish started out as German for blasphemers”), and goes on to demonstrate it with illustrations grouped thematically: Yiddish expressions for food, cursing, sex, death, money and so forth.

Here we find an impressive taxonomy of slapping, a vivid way to encourage haste (“the beggar’s on his third village already”), and a splendidly verbose curse: “a maniac should be crossed off the register of madmen and you should be inscribed in his place”. Wex evinces a great sense of fun as well as a high linguistic seriousness, both combined in such perfect formulations as “an interrogative demikvetch”. I’d like to have found something to complain about here, but I couldn’t. My life is a catastrophe.

We hope that this will lead to Wex’s other books being given consideration in the UK, especially since Howard Jacobson just won the Booker Prize for his comic Jewish novel The Finkler Question