Windows of the Soul

This is the fifth of five guest blog posts I wrote for Powell’s Books. 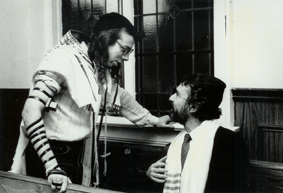 Rosh Hashanah, the Jewish New Year, begins tonight, and for me — possibly the only person in the world who looks at the High Holidays this way — it’s time for window wars, pitched verbal battles over whether the windows in the synagogue I described in the first Powell’s blog should be kept open or shut.

Those of us who still find themselves on the list of people to be called at 5:30 or 6:00 a.m. when someone needs a minyen — and in this place a quorum means ten men, real men, the kind who can wind phylacteries while half-asleep, rattle off a morning service that takes forty-five or fifty minutes in most synagogues in less than half that time, gulp down a shot of rye, eat a Manischewitz Tam Tam cracker, drink another shot, and be on the way back home or to work before the clock’s struck seven — people who have maintained some ties with the place over the years tend to look at it as a sort of church-of-your-choice counterpart to Anthony Quinn in Requiem for a Heavyweight and to think of themselves as an army of loyal Mickey Rooneys in prayer shawls; the born-again orthodox guys — the ones who did nothing but smoke dope and chase women until they realized that someone else was on the verge of having fun — are the villains in this scenario, constantly plotting to sell the shul out and turn it into a downtown branch of one of the outreach organizations with which they’re all associated. We Mickey Rooneys would like to see it a little healthier, a little happier, but we all know that nothing will ever really change: hardly anything has, except for the people inside, since it opened in 1903.

The shul is close to the university, which has thousands of Jewish students, but its insistence on separate seating for men and women has cost it dearly in the competition for shul of choice in downtown Toronto. The egalitarian congregation two blocks away is mobbed on an average Saturday; our shul isn’t even full on Yom Kippur, despite the fact that it’s just about the only place in town that will let you in without an expensive High Holiday ticket.

Separate seating isn’t the only problem, though. The place simply doesn’t conform to North American — which means Anglo-Saxon — standards of decorum. Three years ago, I finally managed to convince the guy who serves as rabbi and cantor — when he isn’t praying, he runs a long-distance trucking firm — to take down the bilingual sign that had hung on the east wall for as long as anybody could remember:

as if it were o.k. to do so if you were just hanging out. No one had actually spit for years, not even after services. The passage where you’re supposed to do so — “They bow down to emptiness and vanity and pray to a god who delivers them not” — had been cut out of the synagogue’s prayer books by Czarist censors.

“But that sign’s always been there.”

“Then at least white out the English, people shouldn’t get the wrong idea.”

Worse than potential expectoration, though, was the regulars’ propensity to get into fights with each other, generally over opening or closing the windows. Mendel would open, Velvel would close; Mendel would open, Velvel would close. This had been going on for so long that nobody at shul could remember ever having heard Mendel and Velvel speak a word to each other or ask anyone else how they wanted the window.

They were in the midst of their usual routine last Yom Kippur. The cantor, whose name is Sheldon, was intoning, “Are all heroes not as nothing before You, and celebrities as if they did not exist,” when Velvel slammed the window so hard that the pane rattled in its frame, then fell to the floor and broke, scattering shards of glass onto a number of hapless worshippers and miraculously injuring nobody. The praying came to a halt. The window was closed, but it had no glass in the pane — everybody should have been happy. But no. Mendel smiled with triumphant mockery and, to everyone’s amazement, addressed himself to Velvel. “Zeyst? You see? You think you’re somebody here? You think you’re something? Look at that window. It’s open forever now. You’re nothing! You wanted, and look what you got. Nothing. Because even by God you’re nothing… Khazn” — cantor, he said, turning to Sheldon — “Davnt vayter, pray on.”

Nobody stopped Mendel, nobody stepped in to stand up for Velvel, who was fighting back tears. We went back to our prayer books and begged for forgiveness.