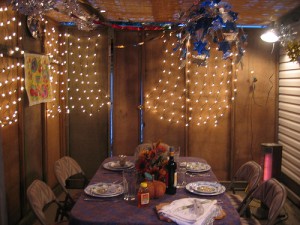 It must be this year’s yontoyvim, because it sure isn’t my fault. First I lose my position as gabbai for giving hagbeh to a trombenik on Rosh Hashana and now I’m stuck in England, watching rain filter through the roof of one of my in-law’s sukkes while being told, quietly but often, that the proper spelling of the Yiddish word for “rag” is shmatter and that I can leave if I don’t agree.

Someone with the manners of a bull in a china shop, the kind of person who interrupts a couple flirting at a party with, “How about them Yankees, eh?” is said to be acting vi a kozak in sukkeh, “like a Cossack in a sukkeh.” The Cossack is sometimes replaced in this sukkeh-idiom by a yovn, a soldier, especially a Russian soldier.

Yovn comes from yavan, Hebrew for Greece or a Greek, a word with no military associations in the original. It came to mean soldier in Yiddish because it sounds very much like Ivan; a yovn is basically a Czarist G.I. Joe. Ale yevonim hobn eyn ponim, says the proverb; “all soldiers look alike”–you’ve seen one of them rape and pillage, you’ve seen all of them rape and pillage. Yevonish, the adjective, can mean the Russian language, while yevonisheh toyreh, “Ivanian Torah,” is filthy language, especially in Russian.

I have been polite since I arrived in England, which is why I’m typing this kvetch on what the English call a kerb, while the local kozak sits quietly in his sukkeh.