Does the book pass the recliner test? 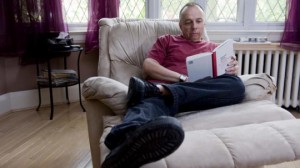 In case you missed it in this Saturday’s Globe and Mail, here’s Wex’s piece he wrote as part of the Globe’s My Books, My Place series.

As someone who can only read in bed if he’s under the covers with a flashlight, a posture too apt to be translated as, “Darling, the honeymoon’s over,” I’ve never been much for hopping into the sack with a volume in my hand. I spent 23 of the last 25 years in a cute but incurably overstuffed apartment in which everything not directly connected with food preparation, slumber or calls of nature took place at the kitchen table or else didn’t take place at all – anything that I read, I read sitting upright on polyurethane, with my right elbow propped up by a Formica tabletop.

A little more than two years ago, after we finally moved, my wife and daughter gave me a reclining armchair for Father’s Day. It’s got a lever, a footrest and a tiltable back that can take mine from upright to supine before you can finish reading a haiku. Beyond mere comfort, though, the chair has provided me with an infallible standard of literary judgment: If I’m awake after five minutes, the book must be good.

, a lengthy interview with the great Czech writer Bohumil Hrabal, whom Josef Skvorecky once described as “a revolutionary of prose, an innovator, a revitalizer of language.” He’s also touching and funny, and has been honoured in his homeland with an accolade that any working writer can’t help but covet: there’s a Czech beer, Postøižinské, named for one of his books.

You can read the original article on the Globe and Mail website here.