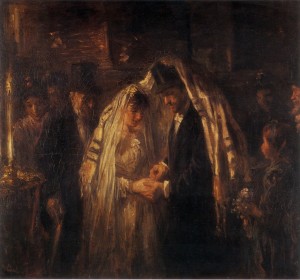 The Fourth of July was the second day of rosh-khoydesh Tammuz, which means that there’s a sudden rush on weddings before the mid-summer hiatus that we call the dray vokhn, a period of mourning during which all celebrations are banned. Wedding planners and anxious mekhutonim are busy busy busy uniting Jewish children before the city empties out when the mourning comes to an end.

The Yiddish idea of the wedding pays more than lip service to this idea of destruction. Most of the idioms dealing with khasenes, weddings, have been inspired by the elaborate arrangements that go into even the simplest wedding. So we get things like makhn a gantse khasene, “to make a whole wedding,” to make a big deal out of something relatively insignificant. Notice the “whole”–it helps to convey the idea of preparation and worry, negotiation and deliberation out of all proportion to the matter at hand. You don’t interview caterers when you feel like ordering a pizza.

Khasene makhn, “to make a wedding, to marry someone off,” can also mean “to destroy, to get rid of something forever.” The idiom depends on a play on words based on the two very different meanings of kale. Alongside “engaged girl, fiancée, bride,” there is another, unrelated kale that looks and sounds exactly the same and means “to be destroyed.” The much better known kalye—“ruined, spoiled, out of order”–comes from this kale rather than from the kalye found in such Slavic-derived words as kalyeke, “cripple.”

More on weddings next time.