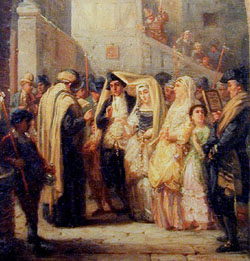 A little more on weddings.

If someone complains about tantsn af tsvey khasenes (mit eyn por fis), “dancing at two weddings (with one pair of legs),” they’re saying that they can’t do two things or be in two places at once. You can talk about tantsn af fremde khasenes, “dancing at other people’s weddings.” This has less to do with party-crashing than with devoting yourself to someone who isn’t really anything to you, while ignoring your own nearest and dearest: “Af fremde khasenes tantst er, but to take his own boy to the father-son banquet, for this he has no time.”

We’ve seen that making a khasene, a wedding, can also mean to destroy or ruin something and that the person who makht khasene a person or thing can be said to make it kale, a word that means “ruined” and looks exactly like the word that means “bride.” Worse, the plural of the kale that means “bride”–– kales––sounds the same as the feminine plural of kal, defined by Alexander Harkavy as a “loose fellow.” His female counterpart is a kale. Hence the slightly off-color saying, ale meydlekh zenen kales, which should mean that every girl is a potential bride, but is really saying that they’re all “light-minded females of questionable moral worth.” I once ran across an all-girl klezmer band called Di Kales who thought they were “The Brides¸” but were hip enough to be happy that their younger Yiddish-speaking fans were flocking to see “The Scatterbrained Tarts.”