Yiddish Cursing as a Form of Recreation 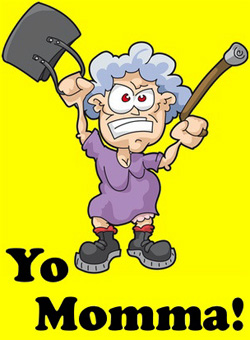 When two Yiddish speakers confront each other as adversaries, the Yiddish equivalents of “drop”, “get”, and “screw” will be nowhere in evidence. In a culture defined by dissatisfaction and debate, even vengeance turns into an argument, an escalating series of “Oh, yeahs?” in which either party threatens the other with things over which neither has any control:

Berl: Ruen zolstu nisht afile in keyver–May you find no rest even in the grave.

Shmerl: Zol dir lign in keyver der eyver, in di kishkes a lokh mit a sheyver–May your penis lie in a grave, [may] a hole and a hernia [lie] in your guts.

This sort of competitive cursing is one of the rarest forms of spoken communication, one in which each participant really listens to what the other is saying. Reciprocal cursing demands reciprocated attention–your response has to build on and demolish whatever has just been wished on you or you’re going to be out of the game.

The game isn’t played very much any more, at least not in Yiddish. Most of the more elaborate curses that you hear these days–either in Yiddish or in English translation–are quoted from books or old recordings, or have been passed along as jokes. Curses like the one above are pretty much a thing of the past, and even then tended to be identified with certain strata of society.