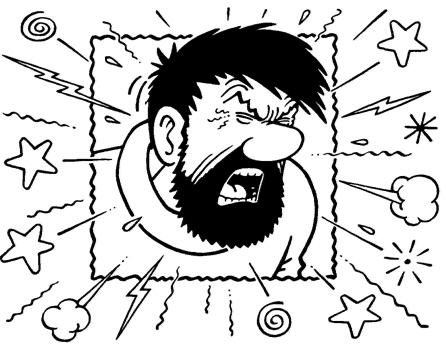 Using Yiddish curses effectively isn’t a matter of yelling out bad words; the trick is to put good ones together in the most damaging possible way. It’s a pastime, an invitation to a dialogue, a form of recreation that lets standard Yiddish thought and speech run wild.

Many curses involve a reversal of fortune; the curse starts out sounding like a blessing – everything looks just ducky until you get to the end, where the whole thing turns around and smacks you in the face.

In a culture in which almost nobody ever admits to feeling good, it should be no surprise that a large group of Yiddish curses involves body parts and physical afflictions.

If you’re really serious about your cursing, and aren’t just toying with your cursee, you need a klole mit beyner, a curse with bones.

The terms for cursing–as distinct from simple use of “bad” words–are quite similar to those found in English: sheltn vi a mark-yidene, “to curse like a market woman”; sheltn zikh vi afn fish-mark, “to curse like in a fishmarket.” We’re dealing with the Yiddish equivalent of Billingsgate, the London fish market that lent its name to all kinds of bad language, a Jewish version of the dozens, the African-American insult-game, but far less sexually oriented and far more likely to be identified as a female rather than a male activity. As in all such games, victory was strictly verbal; if all the ill-wishes came true, there’d be no one left to play with.