The rules of mourning 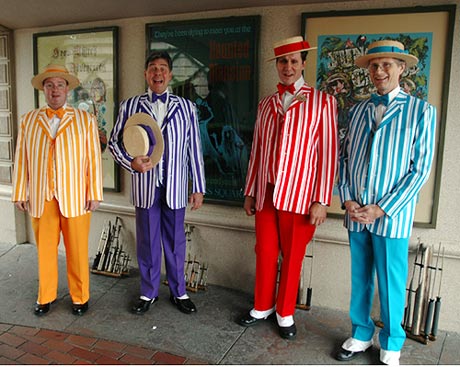 Now that Shavues has put an end to the enforced sobriety of the omer period, my relatives––many of whom still dress in leisure suits designed in eighteenth century Poland-–are getting their glad rags out of mothballs in preparation for Jewish wedding season.

A man who is overdressed for any occasion, let alone the one at which he finds himself, is said to oyszen vi an almen nokh shloyshim, “to look like a widower after the thirty days of compulsory mourning.” Official mourning periods for anybody other than your parents last for only one month, and Jewish religious law considers it meritorious (though by no means obligatory) for a man to remarry within a year after the death of his wife. The image behind oyszen vi an almen nokh shloyshim is of a man who is all duded up and ready to party. Someone who looks like this kind of widower–who is clearly not too disturbed by the loss of his wife–is usually dressed a little too loudly, sporting spats and a rakishly tilted toupee, “a regeleh Casablanca,” as they used to say in Yinglish. The female equivalent, oysgeputst vi Khavele tsum get, “tarted up like little Evie at her divorce,” implies too much make-up and too little cloth–dressed up to get messed up. You can see it all, but you really don’t want to. The female phrase is the more pejorative—a divorced woman is supposed to wait ninety-one days before taking another man, but the widower has managed to hold out until the end of the shloyshim.