Staying on the dairy bench for Shavuos 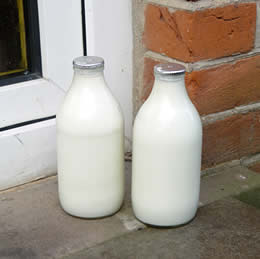 In anticipation of Shavuos, my favorite Yiddish idiom this week is blaybn af der milkhiker bank, “to stay [be left] on the dairy bench.” A bank, literally “bench,” was what would now be called a counter or food preparation area, and every kosher home had both a milkhike and a fleyshike bank.

To be left on the dairy bench is to be shut out of something, unjustly excluded on the basis of a very flimsy pretext–when an excuse is offered at all. The image is based on the fact that observant Yiddish-speakers wait six hours to eat dairy after they have eaten meat, but no more than an hour to eat meat after most forms of dairy.

If such people want to exclude someone of similar background from a social activity, all they have to do is say that they’re going for pizza right after you’ve mentioned having just eaten a burger. Everybody’s hands are tied and there’s nothing to be done about it.

It’s a different matter if you’ve just had an ice cream, though. There’s no believable pretext for leaving you out because you’re milkhik–they just don’t like you. Where saying, “We’re going for pizza and you’re fleyshik” has at least the appearance of legitimacy, “I don’t care if you’re my brother. We’re having chicken at my son’s bar-mitzvah and you’re milkhik,” doesn’t even make sense. It’s a coward’s way of letting you know that they don’t really like you and don’t really care what you think.