Why send your kid to Hebrew school? 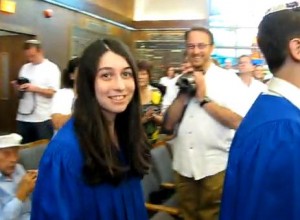 At least once a month, someone, usually a business acquaintance who doesn’t know much about my private life, will ask what my 14-year-old daughter is up to at her Hebrew day school, and then go on to let me know in no uncertain terms that I am a traitor to every aspect of the Yiddish language and culture from which I make most of my living, from the fondly remembered labor movement to the Yiddish-speaking Orthodoxy in which I was raised. They’re upset that someone like me, who spends so much of his time writing and lecturing about Yiddish, has been sending his kid to an Ivrit b’Ivrit (Zionist Hebew-language) day school in which the study of Yiddish is, quite literally, not an option.

Why dafke Hebrew school, and why dafke the kind in which the kids are not only taught to understand the language, but also are expected to function in it without recourse to anything else — English, Russian or French — for 50% of every eight-and-a-half-hour school day? “You like Hebrew so much,” they ask, “why don’t you just send her to Israel?”

I would — if everyone didn’t speak Hebrew there. As things are, though, Hebrew (thank God) comes too easily in Israel, where someone my daughter’s age can morph very quickly into a virtual native speaker. Like any state-sponsored national language, Hebrew in today’s Israel is conditioned, in Gershom Scholem’s words, “by unconscious processes in which the power of tradition is a minor factor.” Every native speaker of Hebrew calls an eagle, for example, a nesher because — because nesher is just what it’s called.

Things are a little different over here, where “eagle” is the default term for an aquiline bird, a fact that allows nesher to take on nuances that might not be present in English: The ideal day school graduate will be able to turn out an idiomatic Hebrew sentence about the nesher on the Great Seal of the United States without being able to forget that she first encountered the word in the 19th chapter of Exodus, which states that God took our ancestors out of Egypt “al kanfey nesharim, on eagles’ wings.” Fluid as a student’s Hebrew might get, such a word — nesher is only one of thousands of possible examples — will never quite lose a certain biblical tinge.

And that’s what I like about day school. When language acquisition rests squarely and unashamedly on “the power of tradition,” students receive a rare opportunity to get the best of both linguistic worlds: the Holy Tongue of tradition, and the day-to-day language of a contemporary sovereign state. Since all classes with any Jewish content at all are taught in Hebrew — these classes include literature, history, Hebrew grammar and composition, and other subjects that would be looked upon as limudei khol, secular studies, in traditional religious and secular Israeli schools alike — pupils develop near-native levels of fluency; gaps in day-to-day usage are filled in during classroom discussion by teachers who tend to be Israeli.

On the more strictly religious side, the kids are learning modern Hebrew in a Jewish context. Whether they realize it or not, they’re being taught to see today’s Ivrit as the most recent stage in an unbroken continuum that starts with the Bible and moves up through the Mishnah and later rabbinic literature, the liturgy and commentaries, and then on to the work of such writers as Mendele, Peretz and Agnon.

My daughter and her fellow students are learning something that might look and sound just like the official language of a state on the other side of the world, but is really a great deal more: It’s a key — the only real key — to who they are, who their forebears were, how and where they lived, and how and why they died.

Fluency in modern Hebrew, along with the ability to read biblical and rabbinic versions of the language with the same facility as students from a traditional yeshiva background, give the day school student (the one who sticks around for a while, at any rate) immediate access to the entire range of Jewish culture: religious and secular, conservative and liberal, ancient and modern. As Rashi puts it — in the idiom in which I was taught — girso de-yankuso miskayem yoyser mi-shel zikno, “What you learn as a child has a longer shelf-life than what you learn when you’re older.” Children who receive such schooling receive both the tradition itself and the means of making it their own: Regardless of where they might end up on the spectrum of religious observance, they will rarely fail to look at the world from a Jewish point of view.

Please note that my daughter’s school is a Hebrew day school — not an Orthodox, Conservative or Reform day school, not a yeshiva. This type of Hebrew day school does not prescribe social attitudes or religious activity outside the classroom. It deals in words, and it’s the words themselves that are important; the students can decide how to use them. Kids like my daughter are getting an education that gives them the tools to develop their own understanding of Jewish life and history and then find their own place in it.

At a time when the various streams of Judaism seem to be growing further and further apart, when delegitimation is more common than cooperation, my daughter and her fellow students — Orthodox (albeit “only” Modern Orthodox), Conservative, Reform and even completely unobservant — not only engage with one another in order to try to understand Jewish law and tradition, but also do so in Hebrew, in the language of the texts that they’re studying, in the idiom of a modern state where some of them were born and many have yet to visit. They’re hardly tannaim (the rabbis of the Mishnah), but they’re engaged in a similar activity. Unlike the tannaim, though, they’re doing it here instead of in Israel. And why? I can’t speak on behalf of other parents, but after paying the Hebrew school tuition, I can barely afford to take my kid to the zoo.