Spit three times when you win an award 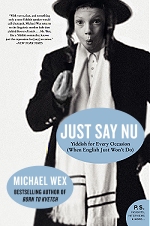 The audio version of my book, Just Say Nu, recently won an award and I found myself confronted with the same problem that I had to face after Born to Kvetch won something: How could I let people know? How was I to say something nice about myself without calling down an evil eye and very likely destroying the very good fortune that I wanted to talk about? How are you supposed to spit three times at the end of a press release?

Some of you might remember the old commercials for Crest toothpaste that had kids running into the house and yelling, “Look, Ma, no cavities!” Imagine these commercials in Yiddish. The kid, in scarf and galoshes, a clove of garlic in a sock wound around its neck, runs into the kitchen. “Look, Ma, no cavities, keneynehore, ptoo ptoo ptoo, af ale yidishe kinder gezugt, may such be the case with all the Children of Israel.” Not very catchy, but if the kid doesn’t do it, the mother will have no choice but to respond with, “Vey gevalt, bays dir op di tsing, bite your tongue,” — i.e., “you’ve just condemned yourself to a life of toothlessness,” and then she’ll have to start spitting.

You can imagine my dilemma. I called my publicist and said, “What would you say if I were to tell you that Mel Gibson’s book about making The Passion of the Christ just won an award?”

To which she replied, “Mazl tov, Michael. What award did you win?”