This is the third of five guest blog posts I wrote for Powell’s Books. 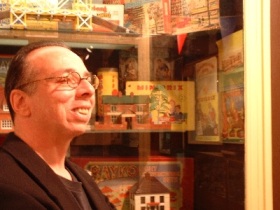 Minibrix was about as handy as Wex ever got...

Anybody who’s ever seen me try to hammer a nail into a piece of wood or build a scale model of the Temple of Solomon out of kitchen matches and popsicle sticks will know what I mean when I say that forcing me to sit through two years of shop class just because I happened to be born with a visible locus of circumcision was one of the greatest blunders in the history of Canadian education.

Herman lived across the street from our yeshiva, where his parents seem to have sent him only because it was close; they sure weren’t religious. Old man Zylberszlager — who was probably about forty at the time — used to sit on their stoop in nice weather, smoking cigars on the Sabbath — when smoking is strictly forbidden — and glowering at us as we came out of services. He was said to have escaped from a concentration camp and even to have killed a couple of people — Nazis, hostile Poles, it depended on who was telling the story — barehanded. He had a beat-up station wagon stuffed with plumbing fixtures, costume jewelry and dirty magazines, and nobody knew what he did for a living. Herman, my classmate, spoke English like Edward G. Robinson and Yiddish like he’d just got off the boat; he was the only kid ever to turn up at yeshiva in three-inch Cuban heels.

Herman and I had an arrangement. He’d rescued me from some gentiles in Cuban heels at a bus stop one day and we’d been sort of friends ever since — not that we ever did anything but homework together. I helped him with Talmud and math, he did my shop assignments, and we were both looking forward to the end of eighth grade.

I guess we all looked the same to the shop teacher, because he never twigged to what was going on. I’d hunch convincingly over a workbench while Herman did my work, generally whipping off a letter perfect example of whatever we’d drawn in our teacher-approved specs (which Herman had also done on my behalf), and then go on to create a masterpiece of his own, something that inevitably involved lathes and fancy chisels and special, secret varnishes that smelled, as some other kid put it just before Herman punched him, like pizem-pish, muskrat pee.

I still regret that I couldn’t write Herman’s math tests or rush in to help him when the Talmud teacher asked him to clarify the differences among four interpretations of the meaning of the term “contract.” He did manage to pass, though, and hung around school until he was old enough to quit. He must have got over his troubles with math; he’s now a major figure in property development.

I, on the other hand, would have been better off in home ec. There were no girls in yeshiva, of course, and boys couldn’t take home ec even in the public school system, but it might have come in handy in later years, particularly during muffin season. I really love the idea of home economy — a redundant phrase, given that the Greek oikonomia already means “household management” — of balancing the value and price of one thing against those of another and then figuring out exactly how to manage them to your best advantage — particularly things with no physical dimension. Every year around this time, immediately before the High Holidays, I become obsessed with ideas of moral profit-and-loss. Does failing to commit a fairly serious sin give you leeway to commit one or more lighter ones? Is there a balance of imperfection that must be maintained if human life isn’t to cross over into the angelic?

From the point of view of the average Jewish person, this kind of bargaining centers entirely on ritual. We all know that murder is murder, lying is lying, theft is theft; we might tell ourselves that we had good reason to commit these sins, but we never forget that it’s us that we’re talking about — there’s no excuse for anyone else. No, real Jewish bargaining revolves around things that no one worries about but Jews: Since I’ve stopped smoking, which is a danger to myself and everybody around me, can I trade cigarettes in for pork?

After all, I used to smoke on Saturdays, which is no less forbidden than eating ham, so why can’t I simply move my illicit activity from one arena to another? I’ll be a better person, and nothing will really change. Bad as eating pork might be, it’s nowhere near as harmful as smoking (unless you’re the pig), so aren’t I making moral progress? Nu, aren’t I? Or have I just talked myself back into shop class, with no Herman to bail me out.