A person of the Book

This is the fourth of five guest blog posts I wrote for Powell’s Books. 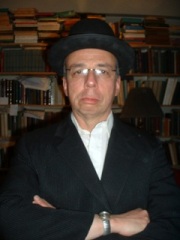 Michael Wex - not a rabbi.

I could never see any point to getting out of school. Coming from a family that occasionally clawed its way into the lower middle-class for up to two years at a time, I was acutely aware of the fact that the kind of jobs available to people like me embraced nothing that anybody ever dreamed of being: general clerk, payroll clerk, file clerk, shlepper. Some yearbook entry, that: “Michael looks up to Lord Buckley and Rabbi Joseph Rozin of Rogchow. His pet peeve is weekend hippies and he hopes to become a shlepper.”

Continuing in yeshiva would only have saddled me with smikhe, rabbinic ordination, after which even shlepper would have been out of reach. I would have had to become a yeshiva-teacher myself, at a time when the staff of a number of prominent yeshivas had been striking for wages that sometimes hadn’t been paid for up to two years: these teachers were owed nearly six thousand dollars. In view of the fact that it was people like my father and the other students’ fathers who hadn’t been paying those wages, we already knew that studying for the rabbinate was something you did because you were too religious not to or too stupid to do anything else — our world had no room for the kind of pulpit rabbis produced by accredited institutions. “Be a rabbi,” as my mother said, “but don’t try to make a living from it.”

I violated both of her commandments and ended up in graduate school instead. Terrified of spending the rest of my life as the same cab driver or custodian I’d been since graduating with a bachelor’s degree in English, I decided to pursue the most complicated, least practical course of study open to somebody with no ambition, no prospects, no math or physics and no desire work. I became a medievalist, specializing in Old and Middle English lang. and lit., with a minor in Old Norse — just in case. What’s weird is, I was good at it, winning scholarships, socializing with my professors, and eventually ending up at Massey College in the University of Toronto, so high-falutin’ a live-in college that we not only wore gowns to dinner (where grace was said in Latin), but had maids, actual human beings who used to clean our rooms — our private rooms, I might add — and even make our beds. Imagine this — a year or two before, I’d been cleaning the kinds of places in which I was now a guest: no goddamned way in hell I was ever gonna graduate a millisecond before I absolutely had to.

In order to further this negative ambition — I’d like to produce a series of books, CDs, and live seminars designed to teach Americans a sure-fire way of avoiding all goals — I learned how to sleep. And sleep. Any time of the day or night, for periods of twelve, fourteen, sixteen hours — no fatigue necessary. Just knowing that wakefulness meant having to slog through yet another monograph on a series of telling inconsistencies in the use of the subjunctive in the C-text of Langland’s Piers Plowman — in German, yet, with most of the footnotes referring to something in Dutch, and all too likely to nudge me a little bit closer to graduation — was enough to keep me snoring away in my gown, while my colleagues labored like Hercules to increase the stock of human knowledge. 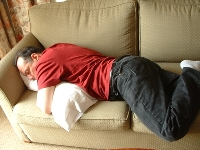 My crowning achievement was the fire alarm. Something, somewhere had tripped it one morning. The fire department came, looked around, found nothing amiss. The alarm, though, had been going for about three-quarters of an hour when someone noticed that I wasn’t huddling in the quad with everybody else. A bunch of them started to knock at my door. No answer. Somebody thought to phone me. No answer. They knocked some more; the same result. “But I saw him going in, even wished him good night.” The person in the next room was pretty sure that I’d spent the night in college.

“What if something’s happened to him?”

“The shock of that alarm could give anybody a heart attack.”

“O my God, get an ambulance. Wex just had a heart attack.”

This has to be the way it played out, because I was awakened by a pair of ambulance attendants. The alarm was still sounding. “We’re glad that you’re o.k., but how the hell can you sleep through forty-five minutes of that farshulggener alarm?”

I sat up on my bed, as proud of myself as Jethro Bodine when he graduated from the sixth grade. “I got me a education,” I said.