This is the second of five guest blog posts I wrote for Powell’s Books.

I’m working desperately to finish a book manuscript in the next four to six weeks, so accounts of my day-to-day adventures in the world at large, not to mention life in the fast-paced Yiddish lane — where Polident seems to be replacing KY as the gel of choice — don’t tend to feature much in the way of incident.

Today, for instance, I got up, drove my daughter across town to school, and took my car in for a check-up. A Hebrew book about scandals in the hasidic world arrived in the mail, as did two unsolicited film scripts e-mailed to me care of my website: “I’m sure you’ll get a kick out of this”; “From one Yiddish fan to another.” I can’t imagine how desperate these people must be if they think that someone like me has the shlep to get their work produced.

The kicker came late this morning, though, after I’d been driven home in the car dealer’s courtesy van because whatever’s wrong with the car is going to require a good half-day’s labor to fix. The wife of a guy I know — the kind of acquaintance you bump into a couple of times a year, usually at some public event — had called me in the summer. “I have this story I wrote a few years ago. It’s about Jewish people. It’s really funny. It’s touching, too. Steve” — the acquaintance — “says it’s as good as anything in a book. He thinks I’ve got a lot of talent.” She giggled. “I was gonna call you a few months ago, but I had to go into the hospital.”

“It happens,” she sighed, “whenever I go off my meds.” I didn’t ask any more questions.

She did, though. “Can you help me get it published?”

I told her that I’d need to see the story. I explained that no publisher is going to publish a book of short stories on the strength of a single unpublished piece by someone with no track record at all. I was quite emphatic about the fact — which really is a fact — that I don’t know any editors at any magazines that publish fiction, so have no one whom I can ask for a favor. I pointed out that I’m not an agent and reminded her of the fact that I had yet to read the damned story.

“Don’t worry, you’re going to love it. Part of the problem is that it’s a hundred and fourteen pages. I thought maybe someone could publish it as a book with pictures. I have a friend who’s a really good artist, and once you’ve finished marking it up and making suggestions, she can get right to work. But why tell you about it? I’ll bring it over right now.”

I suddenly recalled an important appointment. “I’ll just leave it in the lobby, then.”

“Don’t do that; it’ll probably get stolen.” Which is probably the truth.

Can I stop you? “Sure, but remember what I told you. I’m not going to have a chance to look at it until after October. If you don’t mind waiting, I’ll be happy to read it. But I still think you’re gonna have an incredible amount of trouble trying to publish a hundred-and-fourteen page short story.”

She was a little more brusque now. “Give me your address.” 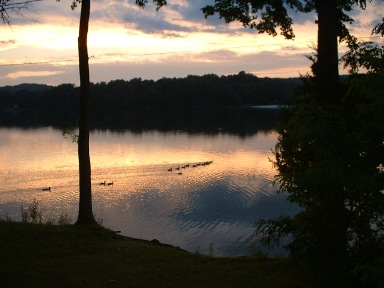 Peace and quiet in the Hudson Valley....

I left town the next day, together with my wife and daughter, for a long-planned road trip through the Hudson Valley and New England.

Among the pile of letters waiting for us when we came back four weeks later was the hundred-and-fourteen page short story, with smiley-face stickers on the front of the envelope and exhortations to keep the Sabbath holy on the back. There were also six or seven phone messages from my acquaintance. He’d taken the voicemail greeting that explained that I was out of town and wouldn’t be checking my messages as a personal affront, and told me — in no uncertain terms — to phone him as soon as I got back to town because, meds or no meds, my behavior — as if I were a naughty teenager and he and his wife, who are both in their late fifties, were my long-suffering parents — my behavior was about to drive his wife back into the hospital. I put the story right where I’d said I would, in the pile of stuff that’s going to have to wait until November, and didn’t return my acquaintance’s calls.

I got back from the car dealer’s late this morning to find my wife in tears. Steve and his wife had both called, demanding to know who I thought I was — which my wife couldn’t answer — and why they hadn’t heard anything about the story. My wife explained once again that I’ve been busy and assured them that I’d be reading the story as soon as my manuscript was sent off. Then Steve or his wife apparently said that at this time of year, right before Rosh Hashana, I should be giving a little more thought to my behavior — there it is again — and trying to improve it.

I fixed them, though, I fixed ’em good. With me, you don’t start up. I took the envelope with her story and shoved it into my pile for the second week of November: They made my wife cry, the bastards? Let ’em wait until Armistice Day.