First Kvetch review in the UK 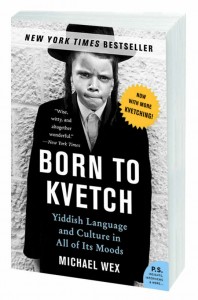 Born to Kvetch was published in England for the first time a couple of weeks ago and has just received its first review in the Jewish Chronicle.

Some academics have been complaining about Born to Kvetch. This is, after all, a book that has zero inhibition regarding vulgarity. It is, moreover, quite politically incorrect and provocative.

For example, there is plenty and more on the traditional anti-Christian motifs embedded in many Yiddish phrases, enough to make a modern Jewish person (or Yiddish teacher of “multicultural” students) want to tsiter (tremble), khalesh (faint), pretend the book doesn’t exist (nisht geshtoygn, nit gefloygn), or makhn pleyte (run for it), as if from a sreyfe (fire).

But none of that is the fault of the author, Canadian-born Michael Wex, whose book renders him heir to Lenny Bruce, Leo Rosten and your favourite Yiddish teacher, all rolled into one. It is the fault — if that is the word — of the Yiddish language. The real one, that is, not the watered-down, standardised version often taught at universities and cultural centres.

Yiddish is the language of an exotic culture, and if you don’t have the stomach for the real product, best to steer clear. Incidentally, Shpinoza bin ikh nit (I’m no philosopher), but hear this: the true modernist is the one who can enjoy the ins and outs of bona fide traditional culture without having to agree with every underlying presumption.

Rosten’s Joys of Yiddish (1968) smashed some of the taboos suffered by Jews in western countries concerning their immediate (or recent) family roots. For that generation, “Yinglish” — Jewish slang in English deriving in part from Yiddish — was enough of a self-revelation and, for some, a kind of gateway into Yiddish proper. Now, with ever fewer pre-Second World War survivors around, there is a need for the real product. This book delivers handsomely.

Ready, then, to move on to the niceties of nuance, of, say: klipe, mazik, ruekh (all sometimes translated “demon” or some such); or a yid fun a gants yor (literally “Jew of the whole year”) as opposed to a rosheshonenik (Rosh-Hashanah-only Jew).

Gey tref (go and guess what might turn out) — the single most important category — is not the explication of Jewish lore per se (which the author does very well, citing biblical and talmudic sources with grace). It is the embedding of thousands of years of Jewish lore in everyday situations that are inherently timeless. They are part of the permanence of Yiddish. Olev-hasholem (of blessed memory) of a departed soul is one thing, but when Michael Wex tells you all about “my job, olev-hasholem” and “my relationship, olev-hasholem” you are verily on the road. Or take niskhomets vern, not in the sense of becoming khometsdik (chametz, forbidden on Passover) but “ideologically tainted, no longer staunch and reliable” (no matter what the belief system involved). Or oys mekhutn (not an in-law any more), with a special sting for any human tie-up just ended.

Weaker parts of the book are, at one end of the scale, very occasional attempts at playing Yiddish academic, and, at the other, more frequent invocations of popular culture icons (from Farley Granger, Courtney Love and Shirley Maclaine to Bart Simpson and Elmer Fudd).

This works terrifically well in the author’s stand-up performances, but is dispensable for future generations (and this is really a book that will stand the test). On the other hand (and wow, does Yiddish have ways of saying “on the other hand”), in cases like the Three Stooges, the Yiddish impact is hugely relevant.

As for kvetching (complaining incessantly), diverse though it is, it derives from the immigrant generation rather than the entire civilisation (which, in its own way, is preserved in living chasidic and other charedi Yiddish-speaking communities).Yiddish can just as well provide for as many chapters on optimism, self-confidence and a sense of stability. And who better to write that sequel than Michael Wex?

The untershte shure (bottom line)? Besides being a pleasure for anyone, every Yiddish student should really — mamesh — have to read it.

Dovid Katz is professor of Yiddish at Vilnius University

Order the hardback, paperback or audio CD version of Born to Kvetch