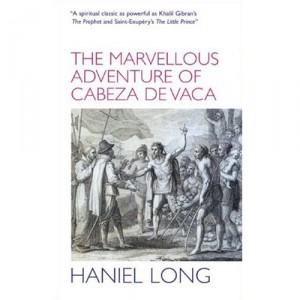 The Marvellous Adventure of Cabeza de Vaca by Haniel Long

The Afterword is the books blog for Canadian newspaper The National Post. Recently Wex was asked (as were several other Canadian authors) to answer this question: If you could add one book to the high school curriculum – a book which students couldn’t graduate with until it was read – what would it be, and why?

Wex’s choice was The Marvellous Adventure of Cabeza de Vaca

by Haniel Long, which he describes as “It’s one of those very rare books that leaves you smarter when you finish it than you were when you started.” To read the article in its entirety, see below. If you’re intrigued enough to want your own copy of the book, click on the image to the left.

First published in 1936, The Marvellous Adventure of Cabeza de Vaca has more in common thematically with Blake’s prophecies or Whitman’s more dithyrambic passages than anything in Hemingway’s Snows of Kiliminjaro, which was published in the same year.

Haniel Long’s very short novel is a fictionalized version of the story of Alvar Núñez Cabeza de Vaca who, as one of four survivors of a 1528 voyage of exploration, spent eight years wandering in the North American wilderness, from Tampa Bay in Florida, across Texas to the Baja California coast and finally south again to Mexico City. He and his companions, always deprived, usually barefoot and naked, and sometimes enslaved, suddenly and inexplicably find themselves gifted with the ability to heal.

Long doesn’t analyze the origins of these miraculous powers, nor does he bother to ask whether they were real or illusory: Cabeza de Vaca, his comrades, and the Native Americans whom they cured all took them as real, though the Spaniards were somewhat skeptical at first. Cabeza de Vaca himself finally draws the only logical conclusion: “We were more than we had thought we were.” They go on being more for thousands of miles and close to ten years.

The first-person narrative traces Cabeza de Vaca’s transformation from arrogant Spanish explorer to someone who begins to act and believe as if we were all living in a world, “where,” as he says, “nothing, if done for another, seems impossible.” The Marvellous Adventure of Cabeza de Vaca is a lesson in human kindness and how tough human kindness needs to be. It’s one of those very rare books that leaves you smarter when you finish it than you were when you started.